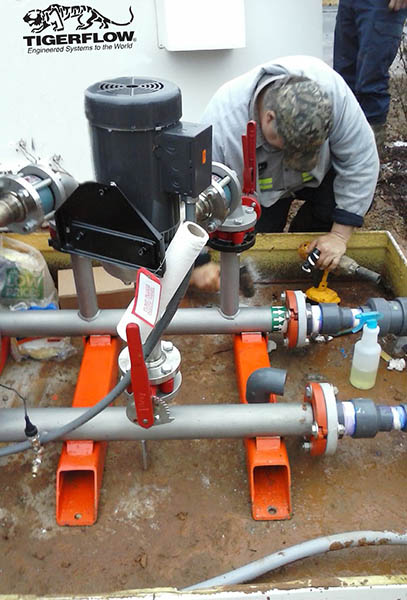 Dallas, TX: Keith Pirtle, TIGERFLOW, Inside Sales Manager, received a call on Wednesday, February 18th from the Friendsville Water Works in Friendsville, Tennessee. They had a recent power outage and freezing temperatures that caused their TIGERFLOW booster pump station to burst, resulting in a water outage for the Enigma Code Way neighborhood. The TIGERFLOW Team jumped into action, checked parts that could be used to make an emergency system, pulled the production drawings and released the replacement booster job to the productionfloor the next day—Thursday, February 19th. Members of the Production Team worked late on Thursday and the job was completed on Friday the 20th!

A hot shot driver was sent from Tennessee on a twelve hour drive to Dallas to pick up the station and return it to the development. Keith was called at 11:30 that Friday night by the driver who had arrived at the TIGERFLOW factory. Keith met him in the Shipping area, loaded the unit with a fork lift and put the driver on his way back east in about 30 minutes for the return trip to Tennessee.

The emergency replacement unit was installed on Sunday, February 22nd – and yes, Keith Pirtle (mechanical tech) and his son, Chris Pirtle (electrical/controls tech) were on their cell phones giving technical support to help start the station up! Keith and Chris were the visible members of the team to the folks at the job site, but in no means, the entire team that made this viable.

Rich Smith here—coming to you live with the plumbing market news and notes! This past couple months has seen us finding two new reps. The Fluid Systems guys are a company that I took away...